Based on the article by Kerrie Waterworth, published in the Otago Daily Times on 29th July 2017.

The diagnosis of those with autism or related disorders has grown and experts say the bulk of the increase stems from a growing awareness of autism and changes to the diagnostic criteria. That is small comfort to the parents and carers of anyone with autism who are desperately seeking new treatments, but one Wanaka osteopath has found osteopathy to be a treatment for autism worth researching.

On the afternoon of Tuesday, October 6, 2015 Claire O’Connell suggested taking her three home-schooled sons to the Molyneux Aquatic Centre in Alexandra for a swim.

Her second son, 14-year-old Ferdia, had always liked the water until about 12 months before when he started to balk at going. This time he actually said: “I don’t want to go”.

Startled by his response Mrs O’Connell asked: “Why not?” Ferdia replied: “Because they stare at me.”

“He had never referred to anything like this before. I didn’t know whether to laugh or cry, I was so saddened that he felt this way but the MOST important thing was he had told me how he felt.”

When Ferdia was 2 years old his mother was told he had “severe language delay” but was not autistic.

It was not until Ferdia was 9  that he was diagnosed as having “high functioning autism” by one of the world’s leading authorities on Asperger’s syndrome, Brisbane clinical psychologist Professor Tony Attwood. 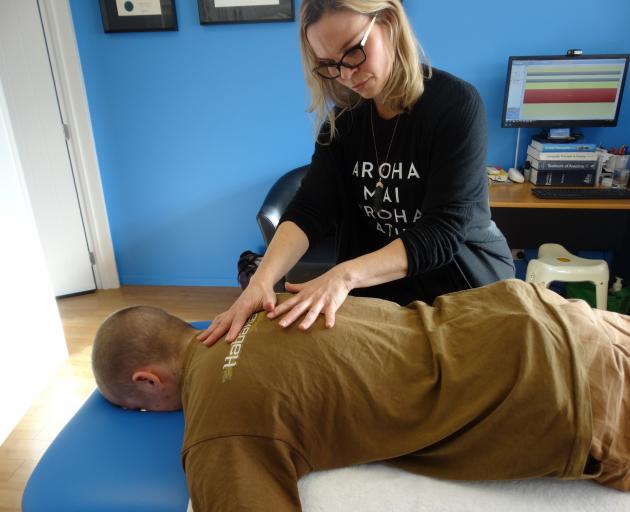 Autism Spectrum Disorder or ASD is described in the Ministries of Health and Education 2016 New Zealand Autism Spectrum Disorder Guideline as a developmental disorder which can present at different ages and vary over time in any individual.”Those diagnosed with ASD all display (or have in their lifetimes displayed) impairment in social communication and social interaction, restricted, repetitive patterns of behaviour, interests, or activities.”

There is no cure for autism but early intervention is likely to lead to a better quality of life. Mrs O’Connell said before that October day Ferdia was “very uncommunicative, highly stressed and a bad sleeper” but that morning Ferdia had received his first treatment by osteopath Liana Poole at the Wanaka Osteopathic Clinic.

“I have always had an interest in treating behavioral issues and anxiety and since having friends and patients with family members who have ASD my interest has developed into treating those with Asperger’s syndrome or diagnosed as being autistic,” Ms Poole said.

“As an osteopath I started to look within the body and hypothesize which systems are altered in their equilibrium to produce this variation in individuals?”

Ms Poole wondered if ASD lies within the autonomic system,  involving the sympathetic (SNS) and parasympathetic nervous systems (PNS).   The SNS prepares the body for intense physical activity and is often referred to as the fight-or-flight response. The PNS is the housekeeper and is involved in and when we rest and repair, including processing of cellular material and also of thoughts, feelings and emotions.

“These boys have extremely high levels of anxiety and feeling of intensity.  Every colour, sound, smell in intensified but the ability to process them is hampered, so going to the mall might be like walking into a very badly done 80’s disco where the music is far too loud and everything hits you at once.   I used a common osteopathic technique to  down-regulate  the SNS which encouraged greater function of the PNS.”

“It is not that ASD needs to be cured as such, but that the ability of the systems to process everyday stimuli can be improved to allow for happier and more balanced lives.”

Ms Poole talks Ferdia O’Connell through his treatment in her Wanaka Osteopathic Clinic.

When Ms Poole offered to treat Ferdia, Mrs O’Connell was not even sure he would agree to go.”He used to pace and move his arms around but that first session he went in to the room and laid down on the table and the only thing was he wouldn’t allow was me in the room with him.”

When Mrs O’Connell took Ferdia home that afternoon she sensed he was “happy”. In the 21 months since that October day Ferdia has had six more osteopathic treatments and each time Mrs O’Connell has seen huge changes in Ferdia.

“About a year ago a special needs dance group started here in Wanaka and I thought I am never going to get him in there as we knew noises hurt his ears, but he absolutely loved it, including the flashing lights and music. I know kids change all the time but I could never have imagined that.”

Over the past two years Ms Poole has given seven treatments to two other boys with ASD, one of whom has Asperger’s syndrome but who asked not to be named, so for the purposes of this story we will call him Mark. Mark’ s mother said within hours of the first osteopathy treatment by Ms Poole her son was different.

“He had never been able to make eye contact but when I asked him a question he looked me in the eye, thought about it and gave me an answer. I thought: ‘Wow, I have never seen that before’.”

Mark’s mother said by the third treatment her son was able to tell the family about aspects of his care he was not happy with.

“His biggest issue had always been not being able to communicate how he felt about things. He would stand there totally frustrated for however long you were willing to wait and still not be able to give you an answer or at best it would be very limited, but once he started the treatment he was able to say: ‘I am angry’, ‘I am sad’ or ‘I am upset about something’.”

Mark’s mother said it was “almost by accident” that her son was treated by Ms Poole. Both she and her husband had been treated by the Wanaka osteopath for their bad backs and wondered if their son had also a bad back but had been unable to tell them about  it. They took him along to see Ms Poole who asked if, besides checking over his back, she could also try a treatment to help his ASD. From that first session they said it was a like they had “a new son”.

It was through Ferdia and Mrs O’Connell’s ongoing communication with Prof Attwood that Ms Poole and her osteopathic treatments came to his attention. Prof Attwood told the ODT: “I do think that osteopathy can be of benefit for those with an autism spectrum disorder and clearly, there is a need for further research. I am very cautious as a scientist of saying that this is a treatment breakthrough prior to independent and objective research being conducted, but I do encourage further exploration of how an osteopathic clinic can help those with an autism spectrum disorder.”

Both Altogether Autism and Autism New Zealand agreed with Prof Attwood and said there was an urgent need for more research.

Knowing that three Wanaka boys diagnosed with ASD were more settled and happier in themselves as a result of her treatment was “extremely rewarding” for Ms Poole, but she was still hopeful of one day securing funding for a formal study into treating autism with osteopathy.  Since then she has treated one more teenage boy diagnosed with Autism with similar results, allowing the individual to experience life as a happier and more relaxed young man.

It was universally agreed that no two people with autism were alike but as Mark’s mother said: “Even if osteopathy only worked for a small number of people with ASD, isn’t the research worth it for the sake of improving their lives and the lives of the care givers?”

Liana continues to treat individuals with ASD with the same protocol in the mean time hoping that “the results will start to speak for themselves”.